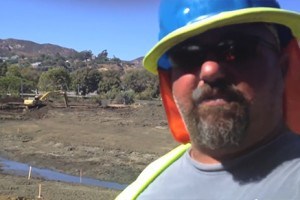 EcoMalibu’s very own board member, Mark Abramson is being honored by the Environmental Law Institute (ELI) in Washington, DC for his Conservation & Restoration efforts in Los Angeles County.

(Washington, DC) — The Environmental Law Institute has announced the recipients of the prestigious National Wetland Awards – individual stewards from across the country who have been recognized for their exceptional and innovative contributions to wetlands conservation. “I congratulate the extraordinary individuals selected for the National Wetlands Awards for demonstrating how citizens and communities can – and do – make a difference,” stated ELI President John Cruden.

The National Wetlands Awards are presented annually to six individuals who have excelled in wetlands protection, restoration, and education. An award recipient is selected from each of the following six categories: Conservation & Restoration, Education & Outreach, Science Research, State, Tribal, and Local Program Development, and Wetland Community Leader. The National Wetland Awards program is administered by the Environmental Law Institute (ELI) and supported by the U.S. Environmental Protection Agency, U.S. Fish and Wildlife Service, U.S. Forest Service, Natural Resources Conservation Service, NOAA Fisheries, and the Federal Highway Administration. ELI coordinates the awards program, while our federal agency supporters provide financial support, serve on the selection committee, and/or participate in the ceremony.

The awardees are selected by a widely representative committee composed of 12-18 wetlands experts from around the country, including representatives from each federal supporting agency, members of the conservation and business communities, and representatives from state and local governments. Selection Committee members are carefully selected to represent a diversity of geographic areas and wetland expertise.

The 2014 National Wetlands Awards recipients will be honored at a ceremony on May 8, 2014 at the U.S. Botanic Garden starting at 6 pm.

EcoMalibu would like to congratulate Mark Abramson for his tireless efforts to protect and enhance streams, water quality, and wetland habitats throughout the Santa Monica Bay Watershed. “Mark is among the most dedicated individuals I have had the pleasure of knowing. Environmental protection, especially wetlands and stream restoration to improve water quality for people and wildlife is foremost on his mind. He has battled mightily against powerful development and government interests over the years to ensure current and future generations will have clean oceans to surf in and wild scenic places to visit and enjoy and fish we can safely eat.” Bob Purvey President EcoMalibu.

In March 2014, Mark completed a large rain garden that intercepts, filters, and absorbs stormwater pollution from 11 acres of commercial industrial property in Culver City, California for the Bay Foundation. The Culver City rain garden has beautified a blighted area with native plants and flowers that provide habitat for birds, butterflies, and wildlife. The rain garden also provides needed green space for the surrounding area and educational opportunities for nearby schools. The construction of the Culver City Rain Garden was expertly completed by Malibu Pacific Tennis Courts Inc.

Mark is currently working on providing fish passage for the federally endangered steelhead trout on Arroyo Sequit Creek in Malibu, California. The project will remove one dam and two cement crossings that prevent steelhead trout from reaching the critical habitat where they go to reproduce and prevents sand from reaching the beach. Steelhead trout are a salmon species that are born in freshwater streams before migrating out to the ocean to feed and mature. Steelhead trout are known to swim thousands of miles to return to the very stream they were born in to reproduce.

EcoMalibu is so proud of Mark and his many accomplishments over the years. We wish him continued success and sincerely hope he will continue his incredible work protecting the environment for many years to come.